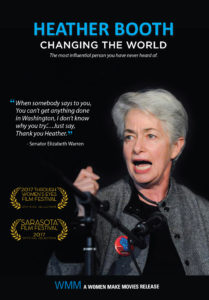 This newest film by critically acclaimed filmmaker Lilly Rivlin traces the ongoing legacy of activist and community organizer Heather Booth.  In telling the story of Heather’s life and work, the film presents an overview of 50 years of the progressive movement, as well as a manual on how to become an organizer.

From a politically conscious college student who began her career in 1964 registering voters in Mississippi at the height of the Civil Rights movement, Heather became the go-to strategist for causes ranging from child care to women’s rights to immigration reform and advisor to leaders including Julian Bond and Senator Elizabeth Warren.  Watch the trailer here!

Registration Now Open! Click here if you would like to send a question to be included in the discussion. This program is part of the screening and will also be recorded and sent to all ticket holders.

Tears Over Russia: A Search for Family and the Legacy of Ukraine’s Pogroms with author Lisa Brahin